Purpose of the Organisation:
To administer, formulate and review the Nationwide Goldfish Standards UK , to promote and organise the annual National Fancy Goldfish Open Show , and further assistance and goodwill to affiliated members.

1.2 The administrative body of the organisation shall be known as ‘The Board’ comprising three representative ‘Officers’ elected from within each of the founding Societies. One ‘Officer’ from each society will be a ‘Principal Officer’ and will be the main representative for
their society. In addition, one principle officer shall be elected as Chairman with an additional officer from the Chairman’s society being put forward for the board. The other three principle officers, one from each society, will be elected to one of the following
specific positions; Secretary, Hon.Treasurer and Standards/Judges.

1.3 “The Board” shall manage the organisation.

1.4 The review of existing and formulation of new standards shall be carried out to agreed protocols before being submitted to The Judges and Standards Committee for final approval.

2.1 The organisation shall be known as: Nationwide Goldfish Societies UK.

2.2 The Aim of the organisation is to bring together specialist Goldfish Clubs and enthusiasts, in order to promote the general and specialist culture of the different varieties of Goldfish. To keep, breed and exhibit along with providing a standard, trained judges and
endorsing the staging of shows around the country, concluding with the National Fancy Goldfish Open Show to be held annually.

2.3 The founding and member societies, have a duty to acknowledge and uphold the excellence of the established written standards, protecting the continuity, progress and preservation of all these varieties .

2.4 The main structure of the organisation has been agreed and established by the members of the founding societies comprising A.M.G.K., B.A.S., N.E.G.S., N.G.P.S.

2.6 General and show accounts, to be presented annually.

2.7 All members are to be treated equally and without prejudice.

2.9 Review of the standards will be considered when the need arises, the formulation of any new standards are to be in line with written protocol for establishing a standard.

2.10 Any changes to this organisation can only be made with the agreement of the founding societies.

2.12 If a society or individual is found to have brought the Nationwide Goldfish Societies UK into disrepute they may face any sanction deemed appropriate by the Board.

2.13 Copyright Standards and Constitution is vested with the Nationwide Goldfish Societies UK. 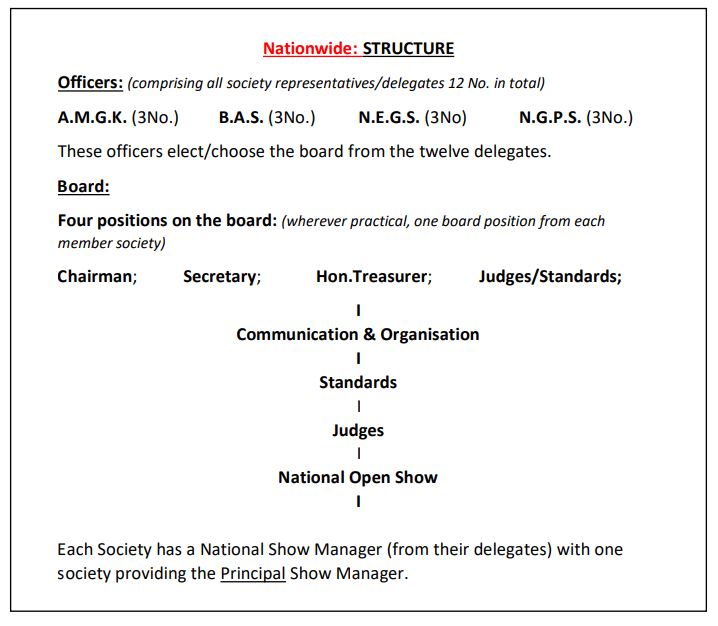 For those breeders wanting to have their ‘new’ variety or a change to an existing Standard variety of goldfish entered into the agreed Nationwide Goldfish Standards, a protocol for achieving this was adopted at the Nationwide delegates meeting held on Sunday 10th June 2012. The relevant extract of the minutes recorded and agreed by all delegates at that meeting is reproduced below for information and clarification:

……………….“ © Protocol for the Agreement of Goldfish Standards. The recommendation under this heading was that we (Nationwide) should build upon the approach recently adopted in our search for an appropriate standard for the Ranchu, by ensuring that any future exercise was conducted ‘across all societies’ and by finding ways to encourage the input from those who were committed breeders to the variety under consideration. Delegates were keen to discuss ways in which information and evidence, for a particular variety, could be obtained from within the Nationwide Societies and how this might be considered and tested before being adopted as either a ‘new’ or ‘revised’ standard.

Accordingly, the following Protocol emerged from our discussions;

1. Requests to determine a ‘new’ or a ‘revised’ Standard will be referred to the Nationwide Committee, who will decide the merits of the request and if agreed the target timetable for the resultant ‘case’ to be presented back to the committee.

2. A Nationwide Delegate representing the Member Society which has formally requested either a ‘new’ standard (to those currently agreed), or a ‘revision’ to an existing Nationwide Standard, shall be appointed as the Lead Coordinator for the variety under consideration.

3. The Lead Coordinator will be responsible for approaching each society to ascertain the names and contact details of each breeder of the variety under consideration. Either directly or through the facilities of other goldfish societies each of these ‘serious breeders’ will be informed of the Standards exercise and will be invited to provide evidence and information about what they look for in their chosen variety.

4. The ‘provision of evidence’ can be in the form of photographs, drawings or written descriptions, though the viewing of examples at Open Shows (where a competitive class is provided), through the staging of special ‘exhibitions’ (at Open Shows) or through arranged personal visits to breeders of the variety. Wherever possible the support of a recognised Goldfish Judge should be involved with such gathering of information and evidence.

5. The Nationwide Committee will be looking for evidence as to how ‘true’ the variety is breeding and whether future development is required, to obtain the ‘ideal fish’. Evidence from first and second generations youngsters will be essential. It is appreciated that this evidence may have to be obtained from more than one breeder of the variety.

6. When the compilation of available evidence has been completed (assistance is available from within Nationwide for the presentation of such information and evidence) then the Lead Coordinator will arrange for this to be presented to the Nationwide Committee. Wherever possible the Lead Coordinator should be accompanied by one or more of the committed breeders of the variety who have provided evidence and information.

7. The task of the Nationwide Committee will be to receive the evidence gathered, ensure that it is robust and is able to withstand detailed scrutiny by Goldfish Judges and other breeders of the variety. The Nationwide Committee will have the right to defer a decision pending the provision of further information, or pending the undertaking of a broader consultative exercise.